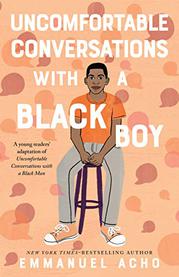 UNCOMFORTABLE CONVERSATIONS WITH A BLACK BOY

Acho is a former NFL player and second-generation Nigerian American who cites his upbringing in predominantly White spaces as well as his tenure on largely Black football teams as qualifications for facilitating the titular conversations about anti-Black racism. The broad range of subjects covered here includes implicit bias, cultural appropriation, and systemic racism. Each chapter features brief overviews of American history, personal anecdotes of Acho’s struggles with his own anti-Black biases, and sections titled “Let’s Get Uncomfortable.” The book’s centering of Whiteness and White readers seems to show up, to the detriment of its subject matter, both in Acho’s accounts of his upbringing and his thought processes regarding race. The overall tone unfortunately conveys a sense of expecting little from a younger generation who may have a greater awareness than he did at the same age and who, therefore, may already be uncomfortable with racial injustice itself. The attempt at an avuncular tone disappointingly reads as condescending, revealing that, despite his online success with adults, the author is ill-equipped to be writing for middle-grade readers. Chapters dedicated to explaining to White readers why they shouldn’t use the N-word and how valuable White allyship is may make readers of color (and many White readers) bristle with indignation and discomfort despite Acho’s positive intentions.