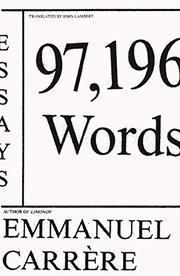 A collection of essays by one of France’s most acclaimed nonfiction authors.

Originally published in France in 2016, these pieces, published between 1990 and 2017, encapsulate novelist and filmmaker Carrère’s (The Kingdom, 2018, etc.) career as a journalist who places himself in his writing and subject matter. In the first piece, the author, then a fledgling crime reporter, recounts the trials of three murderers. Then he explores the life of Dr. Jean-Claude Romand, another murderer who “wasn’t even a doctor” and whose “duplicity” lasted for 18 years. In another essay on Romand, the impostor, Carrère writes that he hopes to “emulate” Truman Capote’s In Cold Blood in a book that would recount Romand’s “life from the outside,” noting that the “presence of the observer invariably modifies the observed phenomenon.” He fulfilled that hope in The Adversary (2000). Many of these essays are shorter versions of books Carrère eventually wrote, from a profile of the young, anti-Putin dissident Eduard Limonov to one on a catastrophic tsunami in Sri Lanka. Carrère is always a questioner, probing as he ponders and tries to honestly assess what he sees, hears, and experiences about other people’s lives. He is especially candid in “How I Completely Botched My Interview with Catherine Deneuve,” and he offers an insightful profile of Emmanuel Macron, with whom he was impressed: “When it’s not Hegel he’s quoting, it’s Spinoza.” There is also a piece on the stories of Phillip K. Dick and a brief assessment of an H.P. Lovecraft story full of “Lovecraft’s trademark—fear.” In “Four Days in Davos,” Carrère writes that he “wants to laugh aloud at the endless stream of infatuated, overbilled [economic] statements.” The best piece is the emotional “Letter to a Woman of Calais,” about the plight of migrants, mostly Syrian, in the city by the Chunnel. Their camp, the “Jungle,” is “a nightmare of misery and filth.”

The best among these essays should bring Carrère new readers.