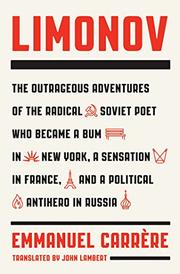 The Outrageous Adventures of the Radical Soviet Poet Who Became a Bum in New York, a Sensation in France, and a Political Antihero in Russia

The life of a controversial Russian writer and adventurer.

Journalist, novelist, screenwriter and director Carrère (My Life as a Russian Novel, 2010, etc.) was amazed when he heard some of Russia’s liberal intellectuals warmly praise Edward Limonov (b. 1943), infamous for his right-wing views and incendiary fascist remarks. That paradox inspired the investigation that resulted in this book, winner of the Prix Renaudot when it was published in France in 2011. Combining biography, political history and memoir, Carrère places Limonov’s “romantic, dangerous life” in the context of what he calls his own “bourgeois bohemian” experiences. Limonov, “a Russian Jack London,” has been wildly impetuous: A rebel, thug and poet, he left his native Ukraine when he was 24; moved to Moscow, where he eked out a living sewing pants; married a beautiful model with whom, in 1974, he immigrated to New York, imagining a “radiant future” as a writer. Despondent after his wife left him, he became a homeless tramp; then, in a sharp twist of fate, he got a job as butler to a multimillionaire, through whom he met a literary agent who placed his first book—autobiographical fiction—with a French publisher. Paris was next, where the literati treated him like “a bit of a star.” But he was restless. Learning of conflict in the Balkans, he decided to fight with the Serbs. When Carrère interviewed him in Moscow in 2007, he was leading a “national assembly of opposition forces.” Limonov has been opposed to political leaders (most recently, “cold and cunning” Putin), to the adulation bestowed upon such writers as Joseph Brodsky, Pasternak and Yevtushenko, and to glasnost, which led his countrymen to believe that they had been duped by “a gang of criminals.” Limonov prefers his Russia “powerful and morose.”

A searching portrait of an arrogant, heroic and willful man—a mix of Jean Genet, Don Quixote and King Lear.