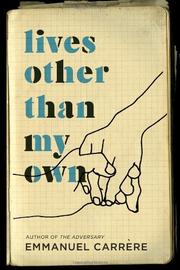 LIVES OTHER THAN MY OWN

The latest from French writer/filmmaker Carrère (My Life as a Russian Novel, 2010, etc.) is an awkward but intermittently touching hybrid of novel and autobiography.

The book begins in Sri Lanka with the tsunami of 2004—a horror the author saw firsthand, and the aftermath of which he describes powerfully. Carrère and his partner, Hélène, then return to Paris—and do so with a mutual devotion that's been renewed and deepened by all they've witnessed. Back in France, Hélène's sister Juliette, a magistrate and mother of three small daughters, has suffered a recurrence of the cancer that crippled her in adolescence. After her death, Carrère decides to write an oblique tribute and an investigation into the ravages of grief. He focuses first on Juliette's colleague and intimate friend Étienne, himself an amputee and survivor of childhood cancer, and a man in whose talkativeness and strength Carrère sees parallels to himself ("He liked to talk about himself. It's my way, he said, of talking to and about others, and he remarked astutely that it was my way, too”). Étienne is a perceptive, dignified person and a loyal, loving friend, and Carrère's portrait of him—including an unexpectedly fascinating foray into Étienne and Juliette's chief professional accomplishment, which was to tap the new European courts for help in overturning longtime French precedents that advantaged credit-card companies over small borrowers—is impressive. Less successful is Carrère's account of Juliette's widower, Patrice, an unworldly cartoonist whom he admires for his fortitude but seems to consider something of a simpleton. Now and again, especially in the Étienne sections, Carrère's meditations pay off in fresh, pungent insights, and his account of Juliette's last days and of the aftermath (especially for her daughters) is quietly harrowing.