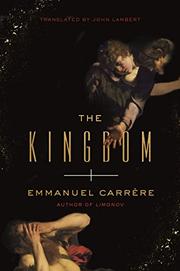 Memoir, fiction, and history combine in a stirring portrayal of the world of the first Christians.

In the 1990s, French novelist, screenwriter, and film producer Carrère (Limonov, 2014, etc.) went through what he calls his “Christian period,” obsessed with matters of faith and prayer. Feeling that he was “touched by grace,” he recorded his thoughts in notebooks and read everything he could to nourish the fervor of his sudden conversion. Now, describing himself as “historical, agnostic,” Carrère draws upon those notebooks as well as diverse historical, biblical, and literary sources to inform his inquiry into the origins of Christianity. Among them are The Life of Jesus by 19th-century historian Ernest Renan, excommunicated because he sought “to give a natural explanation to events that are deemed supernatural”; works by contemporary historian and archaeologist Paul Veyne; historical novels such as Quo Vadis and Memoirs of Hadrian; and even Mel Gibson’s controversial movie The Passion. His most compelling sources are the Gospels of John, Mark, and Luke and the letters and epistles of the demanding, domineering Paul: “I’ve tried to reconstruct what Paul said: the typical discourse heard in the synagogues of Greece and Asia around A.D. 50 by people who converted to a belief that was not yet known as Christianity.” As Carrère portrays him, Paul was “a controversial rabbi,” an irritable, annoying man who could not abide “when people listened to other preachers than him.” Luke comes across as gentler, more temperate and sympathetic. The author examines the Gospels “with a fine-tooth comb,” looking for consistencies, differences, and evidence of their source in a collection of texts known as Q "that tells us how Jesus spoke.” When his own sources fail him, he is “free—and forced—to invent,” which he does, exuberantly. “Christianism was a living organism,” he writes, and it is this organism—protean, fragile, sensational—that Carrère richly re-creates.

A passionate, digressive, empathetic history of religious rebels and the mystery of faith.