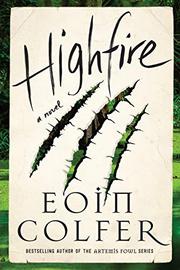 An accident-prone teenage boy named Squib forms an unlikely friendship with a dragon living in a Louisiana bayou.

Squib Moreau can’t catch a break. His kindhearted single mother, Elodie, works long hours as a nurse, and when she’s not worrying about what her son is up to, she’s fighting off the advances of the local constable, Regence Hooke. Elodie and Squib both get the feeling that Hooke is something more dangerous than a sleazy cop, and they’re right: He’s murderous, corrupt, and out to take over the local drug-running business. When Squib sees something he shouldn’t late at night out on the water and Hooke goes after him with a grenade launcher, Squib suddenly finds himself being rescued by a dragon. The dragon in question, Vern (short for “Wyvern, Lord Highfire”), believes he is the last of his kind and lives in secret deep in the swamp. Vern holds a centuries-old grudge against the race that killed off his fellow dragons but finds himself in need of a helper, or “familiar.” Vern may be a dragon, but he has a taste for TV, vodka, Flashdance T-shirts, and all sorts of things he can’t get for himself. Vern reluctantly lets Squib work for him, and over time they develop a camaraderie. But when Hooke sees Vern for himself, he decides to use Squib to force the dragon to do some of his dirty work. Colfer’s best-known writing is geared toward young adults (The Fowl Twins, 2019, etc.), but between some of the gorier scenes and Hooke’s sinister inner monologue, you wouldn’t know it. He writes this book in a folksy Louisiana voice that drawls right off the page: “Squib was as jumpy as a cat in a doghouse traversing the river.” Vern’s taste for modern life (he’s on the Keto diet) is clever, and he is a prickly but lovable foil to the unholy terror that is Constable Hooke.

A fun, unusual contemporary fantasy that doesn’t skimp on violence.