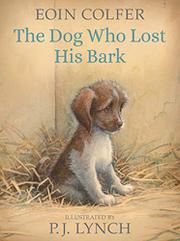 THE DOG WHO LOST HIS BARK

A boy and a puppy overcome difficult times in this illustrated chapter book.

Beginning the tale from the puppy’s point of view, Colfer employs simple language evoking an innocent sensibility, with many words in all-caps reflecting puppyish enthusiasm. The puppy’s early days with his mother and siblings are followed by a heart-wrenching stint with the abusive couple who brings the puppy home as a present for their cruel boy. After the puppy is abandoned at the dump, Colfer switches the point of view to Patrick, a human boy, who is driving with his mother to his grandad’s house to spend the summer. Asking when his touring-musician father will arrive, Patrick is dumbfounded when his mother, instead of answering the question, asks him if he would like to have a dog. Evading the issue of his father’s allergies, Patrick’s grandfather brings him to the shelter, where he picks out (readers will be so relieved) the abandoned puppy and names him Oz. Oz, however, is so traumatized he stays in his crate until, by accident, Patrick’s grandfather discovers that Oz enjoys music. Patrick digs out his violin and plays for him, eventually gaining his trust. Just as all seems well, Patrick learns that his father is leaving his mother—and now it is Oz’s turn to rescue Patrick. Lynch’s realistic pencil illustrations greatly amplify the story, their sensitively rendered human and dog expressions echoing the varying tones of the text. Humans are depicted as white.

This quietly emotional tale is an ultimately triumphant one