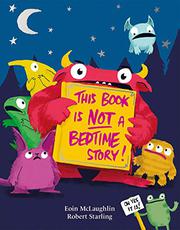 THIS BOOK IS NOT A BEDTIME STORY!

No one wants to be scared just before bed; better avoid this one. (Not!)

“Bedtime stories / make you sleepy. / This book won’t. / It’s much too CREEPY.” The horned, red-furred narrator, aka the World’s Scariest Monster, says they’ve got umpteen scary faces and their middle name is “Terror” (but their Scary Monster Society license reads: “Fluffy Terry McFluff”). The woodland animals the monster is trying to scare are a bit skeptical. The monster’s roars are loud but sound a bit like sneezes. No matter: “My monster gang / are a horrible bunch. / They’ll spread you on toast / and have you for lunch,” the monster goes on. The wide-eyed and extremely cuddly gang will indeed be happy to have the animals for lunch (as guests). The monster keeps trying, taking the gang to a haunted house (where they can’t even scare a mouse), a ghost pirate ship (where the scariest thing is a seal’s shadow), and a cave (where the gang are terrified). How about if they hide under your bed? But when the moon points out that the little monster looks sleepy, the tale does end in snores. McLaughlin’s boastful monster narrates the primary text in rhyme, with speech bubbles conveying both the forest creatures’ doubts and the monster gang members’ dialogue, which comically undermines the narrator at just about every turn. (This book was reviewed digitally.)