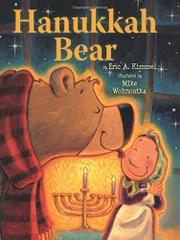 by Eric A. Kimmel ; illustrated by Mike Wohnoutka

A well-used trope of misidentification allows a village elder to innocently open her home to a possible predator with humorous, even endearing results.

Despite her advanced age of 97 and her poor eyesight and hearing, Bubba Brayna “still [makes] the best potato latkes in the village.” When Old Bear is awakened from his winter sleep by the savory aroma of frying latkes and comes to her door, Bubba Brayna invites him in for a fresh batch, mistaking the bear’s rotund girth and bushy face for the heavy-set bearded rabbi’s. Heading straight for the kitchen, the growling bear is encouraged to play dreidel with nuts he chooses to eat, then devours all the latkes with jam like any hungry bear would. Sleepy and satisfied, he leaves with a gift of a red woolen scarf around his neck. After some investigating by the crowd that has gathered at Bubba Brayna’s door, which includes the actual rabbi, a new batch of potatoes are brought from the cellar, and with everyone’s help, Bubba Brayna hosts a happy Hanukkah. This newly illustrated version of The Chanukkah Guest, illustrated by Giora Carmi (1990), is a softer rendition, with acrylic paints and curved lines in tints of yellow, brown and green for warm, earthy atmosphere.