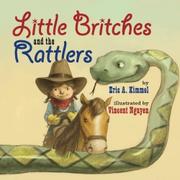 LITTLE BRITCHES AND THE RATTLERS

by Eric A. Kimmel & illustrated by Vincent Nguyen

Kimmel’s latest retells Little Black Sambo with a Southwestern flavor. As Little Britches saddles her pony and heads out to a calf-roping contest, she decides to take a shortcut through the dry gulch. When her journey is interrupted several times by rattlesnakes who threaten to “s-s-swaller” her up, the quick-thinking, pint-sized cowgirl offers up her doeskin vest, chaps, red boots and other attire in exchange for permission to mosey along. While the little girl hides her feelings behind understated facial expressions, the vibrantly colored snakes, ridiculously tricked-out in Little Britches’s clothing, stand out against the pale background in Nguyen’s digitally enhanced graphite-and-watercolor illustrations. As in the original story, the vain rattlers’ argument over the best outfit leads to a mad, circular, ultimately fatal chase (although there’s no rattlesnake-butter at the end, readers may be relieved to discover). Can this adaptation, thoroughly divorced from its origins by complete lack of mention in any note, cool off children’s literature’s hottest potato? Maybe—for a blissfully ignorant audience, it’s a rattling fun tale. (Picture book. 4-8)