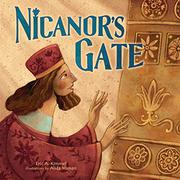 by Eric A. Kimmel ; illustrated by Alida Massari

Anyone looking for a definition of “miracle” could look to this picture book.

The miracle Nicanor witnesses couldn’t be more straightforward. He’s hired the finest artisans to build a gate for the Temple in Jerusalem, two colossal doors made of metal. But as soon as they’re placed on a transport ship, a storm begins. It sinks one of the doors—and very nearly the ship—to the bottom of the sea. But just as the precious cargo seems to be lost, the law of gravity appears to reverse itself, and the door is suddenly floating on top of the water. It would be difficult to find a clearer example of deus ex machina. But if the plot is unsurprising (at least to people who believe in miracles), the story still manages to convey a sense of wonder. This is due largely to Massari’s illustrations. The text describes the doors: “cast from Corninthian gold, a rare mixture of copper, gold, and silver that gleamed like the sun.” The colors in her pictures are so rich that the metal really does look like gold. (The characters’ skin tones are equally rich and varied shades of brown.) The marvels also contrast beautifully with the bleakness of the story. When hope seems lost, one character responds with both faith and resignation: “We do what we can. The rest is in God’s hands.” (This book was reviewed digitally with 9.75-by-20.5-inch double-page spreads viewed at 83% of actual size.)

This story will take away, and immediately restore, readers’ belief in miracles.