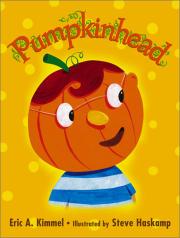 by Eric A. Kimmel & illustrated by Steve Haskamp

One thing you can say about Pumpkintown: Everyone has squash for brains. Young Pumpkinhead, who lives in Pumpkintown with all the other pumpkinheads, gets to wondering: “Does everyone in the world have a pumpkin head?” All of the townsfolk figure that’s probably the case, but then no one in town has ever been outside of town. All except Pumpkinhead’s mother, who, by telling Pumpkinhead that the answer to that question is a mystery, sets the lad on his quest of discovery. He takes to the road to learn the truth. That first night, so as not to lose his way in the morning, he removes his head before he goes to sleep and points it in the direction he wants to go when he wakes. Two mischievous squirrels overhear Pumpkinhead talking to himself about this stratagem and when he falls asleep, they give his head a half turn. When Pumpkinhead takes off in the morning, he’s heading home, though he doesn’t know it, and sure enough he comes upon a town like Pumpkintown, just like Pumpkintown. After talking with the townsfolk, who assure him that they are all pumpkinheads (his parents included, since they don’t recognize him), he heads back the way he came to tell his neighbors the news. He bunks under the same tree he had the night before, gets the same treatment from the squirrels, and winds up back home, yet again, with news of a world full of pumpkinheads. Bright with folly and tomfoolery, Kimmel’s tale has universal application and is ideally depicted by Haskamp’s crew of amiably clownish pumpkinheads. (Picture book. 4-8)