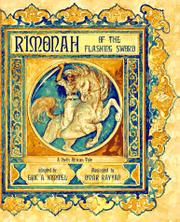 RIMONAH OF THE FLASHING SWORD

adapted by Eric A. Kimmel & illustrated by Omar Rayyan

A North African version of Snow White, with forty thieves in the role of the seven dwarfs. In its new setting, the familiar story picks up a series of exotic gimmicks—bedouins in the desert, a pendant in the shape of a scorpion that comes alive after sunset, a flying carpet on which the wicked stepmother tries to escape—but the plot remains more or less the same. However, Kimmel has considerably reworked the traditional story by turning Rimonah into a ``fearless young woman who rode with the reckless daring of a bedouin horseman''—attractive by virtue of her actions as well as her looks. Rayyan's illustrations—thin, layered watercolors- -achieve a strong effect in subtle ways. His palette is soft, fragile; his carefully constructed compositions show expressive draftsmanship. The poses of the characters, the arrangements of the groups, the geometric interiors—everything has an eloquence that is completely independent of color. (Picture book/folklore. 4-8)