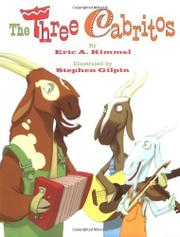 by Eric A. Kimmel & illustrated by Stephen Gilpin

Kimmel sets his reworking of “The Three Billy Goats Gruff” just north of the Rio Grande, sending caprine musicians Reynaldo, Orlando and Augustín tripping across the border to a fiesta in Mexico. First, of course, they must first get by the fearsome Chupacabra, or “goat sucker,” guarding the bridge—who demands a tune in exchange for their lives. Gilpin stands the goats on hind legs, gives them overalls, band instruments and big horsey grins and pits them against a spiny blue monster that resembles a cross between Yoda and a whale-sized flea. Ultimately, big Augustín tootles away on his accordion until the dancing Chupacabra collapses and deflates in exhaustion. Any political implications in this fresh, original take on the familiar tale are (surely) inadvertent, and would go over the heads of younger readers anyway. (end note) (Picture book/folktale. 5-7)