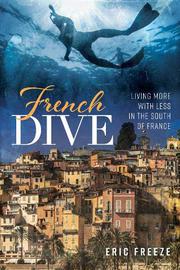 Living More With Less in the South of France

A big American family decamps to a tiny French apartment in this vibrant memoir.

In 2014, Wabash College English professor Freeze, the author of Invisible Men(2016), and his wife, Rixa, packed up their four kids, ages 1 through 7, and moved from Indiana to a 700-square-foot apartment in a 14th-century building in the French coastal city of Nice. Many Niçois were surprised that the couple had moved such a large clan to the cramped, touristy, overpriced city, but there were compensations, such as the bustling street life, gracious squares, and small stores; superb cheeses; and the pellucid blue Mediterranean. Much of the book recounts the family’s nest-building during a long renovation, assisted by a string of colorful construction workers; the narrative centerpiece is a hilariously surreal account of the Freezes’ appearance on the reality show House Hunters International, reenacting a grossly fictionalized, melodramatic version of the house hunting they’d done just months before. Threaded throughout are Freeze’s adventures in spearfishing as a way to get free food for his family, and the scenes of his epic dives depict both his intense guilt about “the violence of the thing I was prepared to do” and gripping, Hemingway-esque action as he stalks wary fish: “A roucaou finned its way toward me….It was still out of range but it didn’t seem to see me as a threat. It came closer. Three feet, two. My lungs were on fire.” Freeze’s limpid prose blends vivid travelogue and family portraiture with a defense of France’s simpler lifestyle, as well as a cleareyed critique of the country’s flaws, including racist treatment of African migrants: “Our benign and welcoming conversation with the immigration officer…was a stark contrast to the shouting matches and aggression that we heard in adjacent rooms.

A captivating and insightful meditation on making a home among strangers.