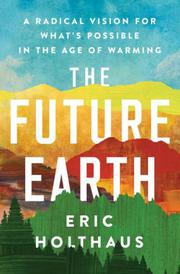 A Radical Vision for What's Possible in the Age of Warming

“A new era of urgently paying attention to nature has arrived,” writes Holthaus; in the introductory chapter, “A Living Emergency,” he delivers an alarming global overview of our current climate conditions. Vividly detailing the severity of recent hurricanes, wildfires, droughts, floods, and other natural disasters that have devastated large sections of our planet, he relates how each can be directly attributed to increased carbon emissions and how the levels in 2019 “were the highest in human history.” “We can no longer deny that weather in every corner of the Earth is different now,” writes the author. “That change is because of us. And we have the power to choose a different path.” Despite the substantial obstacles created by our current political landscape, which is driven by the financial interests of major corporations, Holthaus finds hope in the diligent efforts of leading scientists and environmentalists, the new wave of progressively charged politicians and the concept of the Green New Deal, and youth organizations such as the Sunrise Movement. All emphasize the urgency of finding ways to go beyond simply transitioning to electronic cars; we must radically shift from an aggressive, profit-centric growth economy to a “regenerative economy” focused on sustainability. In the second half of the book, Holthaus outlines a detailed plan by decade, leading up through 2050. Writing in the past tense, he somewhat optimistically lays out the results of these measures as having already taken place—e.g., “2020-2030: Catastrophic Success” or “2030-2040: Radical Stewardship.” In the chapter titled “2040-2050: New Technologies and New Spiritualities,” the author concedes that even with emissions possibly reduced to “two-thirds of current levels,” temperatures “will likely continue to rise” and may require the use of controversial methods of geoengineering, which include the concept of “planet-cooling aerosol technology.”

An encouraging and diligently researched call to action regarding the most pressing issue of our time.