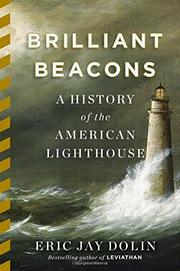 A History of the American Lighthouse

A fine history of lighthouses, “among the most beloved and romanticized structures in the American landscape.”

The author of other masterly works on key aspects of American history and growth (Fur, Fortune, and Empire: The Epic History of the Fur Trade in America, 2010, etc.), Dolin here presents a thoughtful, straightforward chronicle of the American lighthouse, from the earliest, completed in 1716 at Little Brewster, in Boston Harbor, as a harbinger of burgeoning Colonial maritime growth, to the death of the last civilian keeper—at the Coney Island Lighthouse—in 2003, Nearly all the biggest cities in the Colonies were ports, and little by little, the harbors at Rhode Island (Beavertail Point), New York (Sandy Hook), and South Carolina (Charleston’s Morris Island) were constructed in quick succession. Wars wreaked havoc on lighthouses, as they became military targets and were often dismantled—e.g., Sandy Hook was seized by the British during the Revolution, becoming a magnet for loyalist refugees; the Key West, Florida, lighthouse, seized by the Union in 1861, provided the Union naval forces lighted guidance through the dangerous south Florida waters during the entire war. Throughout the book, Dolin ties together important strands to the lighthouse story: the federal government took over from the states the building and upkeep of lighthouses with the Lighthouse Act of 1789, indicating the importance of the institution yet also putting the oversight at the “rule of ignorant and incompetent men,” such as the penny-pinching, shortsighted, long-running auditor Stephen Pleasonton. He relied on the old-fashioned “magnifying and reflecting lantern” of Winslow Lewis rather than the state-of-the-art European Fresnel lens (created by French inventor Augustin-Jean Fresnel), adopted finally by all lighthouses through the Lighthouse Board in 1851. Dolin also weaves in the heroic stories of lighthouse keepers (men and women), and along with engineering feats, there are also fantastic tales of kamikaze birds and other instances of wild nature coming up against these man-made structures.

A delightful journey with excellent sketches, renderings, and resources for museums and organizations.