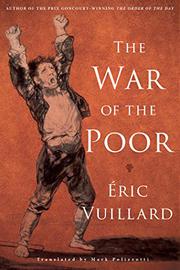 THE WAR OF THE POOR

A slender, vivid history of a 16th-century populist revolt that holds relevance for current times.

In his latest, Vuillard, the winner of the 2017 Prix Goncourt for The Order of the Day, follows Thomas Münzter (c. 1489-1525), a zealous German preacher “who rejected the debates among learned theologians; esotericism made him sick. He appealed to public opinion.” Throughout this brief but powerful, moving book, the author clearly and poetically demonstrates Münzter’s passion for reform. “He is enraged,” writes Vuillard. “He wants the rulers’ skins, he wants to sweep away the church, he wants to gut all those bastards….He wants to put an end to all that pomp and miserable circumstance. Vice and wealth devastate him; their conjunction devastates him.” As the narrative progresses, the initial feeling of disjointedness morphs into a delightful thread of connection as the author pinballs around the 16th-century landscape. He chronicles the plight of the repressed serfs in Leipzig, Prague, Rome, and Avignon. Like most fanatics, Münzter could occasionally come across as a raving lunatic, leading the poor to raise the wrath of God against the godless rulers who suppressed them. The availability of the Bible in the vernacular encouraged Münzter to receive God’s direct message through visions and dreams. People flocked to hear him conduct services in German. He rejected Thomas Aquinas and Saint Augustine in favor of Erasmus and Raymond Lully, though he eventually dismissed all theologians. In addition to his Prague Manifesto, Münzter also wrote Protestation, which argued that “the crucial experience of humanity was suffering,” the only way that one “could receive the word of God.” Summoned to justify his work to the Elector of Saxony and the crown prince, he foretold the rise of the silent flocks who would destroy them.

A slim book in which every word is important, one that deserves to be read multiple times.