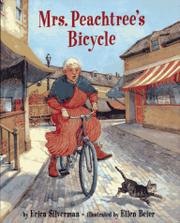 This turn-of-the-century tale breaks stereotypes while teaching the value of determination. Elderly Mrs. Peachtree, worn down by afternoons of delivering tea and biscuits, buys a bicycle to make her job easier. The bicycle shop owner, and everyone else she meets, insists that ``wheeling'' isn't ladylike, but Mrs. Peachtree remains undaunted. Accompanied by her cat, Shadow (from Mrs. Peachtree and the Eighth Avenue Cat, 1994), the feisty heroine endures mishap after mishap, tumbling into flower carts and vegetable wagons. Mrs. Peachtree's spills are a trial for readers, too, who will root for her to give up before she breaks a bone; fortunately, she is not so weak-willed. It takes an emergency involving Shadow and a curious pooch before she gets the hang of the two-wheeled contraption. Silverman's story makes statements against sexism, ageism, and mindless adherence to convention, all at the same time. Best of all, it maintains a light, breezy tone throughout, not only in the text, but in Beier's pictures, too. (Picture book. 4-8)