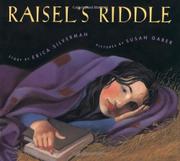 Silverman (The Halloween House, 1997, etc.) tells of Raisel, an orphan girl who is raised by her scholarly grandfather until his death; three wishes from an old beggar woman allow Raisel to attend the Purim play dressed as Queen Esther, where she captures the attention of the rabbi’s son. It is her clever riddle about the precious nature of learning, however, that eventually wins his heart. Carefully crafted, this story not only entertains, but it teaches readers about the Jewish holiday, Purim, Queen Esther, and the tradition of costumed re-enactment. Unlike a majority of the other versions of the Cinderella story, this one does not include a self-absorbed prince who combs the countryside looking for a bride of a particular shoe size; refreshingly, Silverman’s hero is as intelligent as he is handsome, and seeks a bride who is his equal. Graber’s illustrations are the perfectly complement, embodying Raisel’s transformation from a life of servitude to one of riches “more precious than rubies.” (Picture book. 5-8)