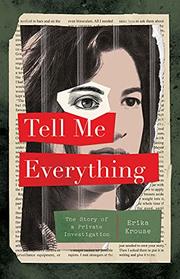 The Story of a Private Investigation

An inquiry into allegations of rape reveals a university’s complicity in fostering a dangerous sports subculture.

In this memoir, Krouse, a creative writing teacher at the Lighthouse Writers Workshop in Denver, explores her role as a private investigator working on a complex and eventually high-profile sexual assault case along with its relevance to her own history of abuse. In 2002, she was hired to help track down leads and interview key figures in a lawsuit being prepared against a university in Colorado. The university’s celebrated football program, it was alleged, encouraged a culture of sexual violence and routinely sheltered athletes from facing legal consequences for criminal acts. Over several years, Krouse gathered key evidence for the attorney leading the case and was instrumental in persuading victims and witnesses to participate in the prosecution. The narrative that emerges is riveting and consistently insightful in its assessment of the psychodynamics of trauma for both victims and offenders; the valorization as well as the exploitation of male athletes; and the often volatile intersection of race, gender, and class in top-level college athletics. Rather than simply demonizing individuals, the author convincingly demonstrates how institutional practices have enabled (and covered up) predatory environments. “Perhaps by ghettoizing these men, isolating them, removing consequences, delivering regular blunt force trauma to their brains, and teaching them daily to hurt people,” she writes, “the university was molding an elite group of potential perpetrators for its own financial gain.” The personal narrative, interwoven seamlessly alongside the professional one, is equally compelling. In explaining the toll her involvement in the case exacted on her, Krouse movingly documents her attempts to gain from her mother an acknowledgment of the abuse she endured as a child—and to make sense of their deeply troubled relationship.

An exceptionally well-told, perceptive examination of a sexual abuse scandal and its personal and social relevance.