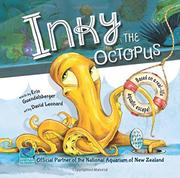 Inky the octopus sings his tale.

Longing for the excitement of the “open sea,” a captive octopus describes its getaway. Basing her re-creation on an actual octopus’s escape from the New Zealand Aquarium, in 2016, Guendelsberger imagines the dissonance between Inky’s comfortable familiarity with aquarium life and his yearning to be free, finishing with his actual escape. The text is written in ballad meter, repeating variations on the refrain: “Out of this tank, I must break free. / I hear the ocean calling me!” Readers aloud may find some arrhythmic lines: “I’ve always liked eight-arm charades and seaweed hide-and-seek. / I’ve had fun playing gravel hockey and tentacle tag each week.” More importantly, the first-person narrative anthropomorphizes this alien ocean invertebrate, attributing dreams, senses, and communication skills that are human but not likely appropriate for octopuses or even fish. (In contradiction to the endmatter entry, the correct plural is octopuses, not the occasional octopodes or the incorrect back-formation octopi.) In a highly unlikely conversation with his tankmate Blotchy, he invites the fish to accompany him into “the far and great unknown.” The fish replies he would “rather stay / within his comfy home.” Leonard’s appealing cartoon illustrations reinforce this anthropomorphizing, with amusing expressions in Inky’s humanoid eyes and even a bag of belongings hanging from one tentacle as he imagines his quest. All the humans shown seem to be white. Since the actual escape was nothing short of astonishing, the anthropomorphization serves to cheapen rather than ennoble the subject.