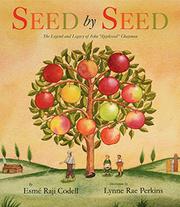 The Legend and Legacy of John "Appleseed" Chapman

A simple introduction to an American legend turns up inspiration for making the world a better place.

Frontier nurseryman John Chapman, born in Massachusetts just before the Revolutionary War, had traveled thousands of miles by his death and covered the Ohio River Valley with apple-tree nurseries, showing pioneer families how to start the orchards that would strengthen their attachment to the land. He had already become the legendary “Johnny Appleseed,” known for singular habits of dress, kindness to animals, friendship with pioneer and original settlers and a love of books. Saintly stories (“The Native Americans respected him for his spiritual bond with his surroundings, his kinship with all that grew and lived”) about Chapman inform this account. Codell says that Johnny Appleseed “left five [footsteps] for us to fill: Use what you have. Share what you have. Respect nature. Try to make peace where there is war. You can reach your destination by taking small steps.” Perkins’ watercolor, gouache and collage illustration is lively and disarming; a stitched sampler across one full opening offers rolling hills with apple trees in both blossom and fruit, Johnny Appleseed in the distance. Sources and acknowledgments appear on the title-page verso, while a final page offers suggestions for celebrating Johnny Appleseed’s September 26 birthday, including a simple apple pie recipe and the graceful Swedenborgian hymn many children will know as "the Johnny Appleseed song."