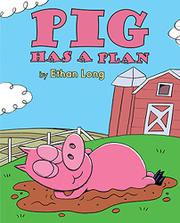 PIG HAS A PLAN

A noisy barnyard is no place for a nap!

Poor pig, all he wants to do is take a short snooze. However, there seems to be something going on around him. Each of his farm friends is making noise of one kind or another. “Hen wants to saw.” “Dog wants to tap.” “Hog wants to hum.” Pig looks closer and closer to fainting from exhaustion until he spies some drinking straws and has an idea. He sinks himself in his mud puddle and breathes through a straw snorkel. He’s finally able to catch some Z’s…but all those barnyard noises had a purpose: prep for a piggy birthday celebration. So much for napping! Long’s entry in the I Like to Read series tells its simple tale in 47 words, nearly all of which are of the single-syllable, easy-to-sound-out variety. Bright pastel-and-primary full-bleed illustrations featuring big-eyed farm folk will keep eyes on the page during storytime or guided independent reading. The visual humor and the easy-reading text make this a winner for readers just starting out.

Proving even pooped piggies are ready to party, this will make children want to join in.