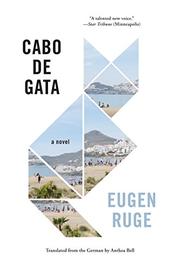 In German Book Prize winner Ruge’s (In Times of Fading Light, 2013) new novel, a writer abandons his life in Berlin and embarks on a journey toward self-realization.

In the wake of his mother’s death and the fall of the Berlin Wall, Ruge’s unnamed narrator finds himself deeply discontent with the mind-numbing monotony of his life. He’s 40, exists generally in solitude, and can’t seem to cut ties with his ex-girlfriend Karolin, whom he dated for 10 years. After being cajoled into watching Karolin’s daughter (whose father, ostensibly, is not him) on New Year’s Eve, our narrator decides it’s time to leave Berlin and finally start that novel he’s been meaning to write. The next morning, “like a man venturing into the street for the first time after a long sickness,” he departs to Barcelona and, from there, takes an overnight bus to the titular Cabo de Gata, a village on the southeast coast of Andalusia (a word which he, heretofore, always thought fondly of as “A kind of fantastic adjective meaning wonderful or enchanting”). Suffice it to say, it’s no paradise. To his dismay, he’s dropped off in a ghost town complete with shoddy architecture, a few vacant bars, and a promenade overrun by gangs of cats and dogs. But after a few peculiar encounters on the beach—involving a deceased hermit crab and a flock of synchronized birds hunting for food—he decides to stay for more than just one night and eventually acquiesces to the simpler lifestyle of Cabo de Gata. And the fact that he’s largely ignored by the locals only makes him more emboldened by his anonymity. The tone of the novel shifts and gradually becomes darker when our narrator meets an elusive ginger tabby cat that takes to him and also eerily reminds him of his mother. With colloquial prose and sardonic wit, Ruge eruditely captures his narrator’s precarious reality and creates a world that’s a pleasure to observe and meander through.

At times ruefully hilarious and absurd, this slight, philosophical book will humor anyone who’s ever questioned his or her place in this unforgiving universe.