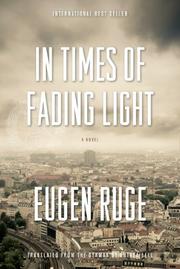 IN TIMES OF FADING LIGHT

A multifaceted look at four generations of an East German family with roots in the Communist Party; this debut was a commercial and literary success in the German author’s homeland.

The action moves back and forth over 50 years, beginning in 1952, but the central event, witnessed by six different viewpoint characters, occurs in 1989, shortly before the Berlin Wall comes down. The occasion is the 90th birthday party of Wilhelm, the patriarch, an unrepentant Stalinist and Party bigwig. Family members present include Charlotte, his imperious, mean-spirited wife, and his stepson Kurt, a respected Party historian and timid reformer. Conspicuously absent are Kurt’s Russian wife and his rebellious son Alexander, who that day has fled to the West. Though ideology is a crucial element of the novel, first and foremost come the domestic concerns that affect any family. Thus, the climax of Wilhelm’s party will not be his receiving one more Party honor, nor the news of Alexander’s defection, carefully concealed by Kurt, but the collapse of the old folks’ dining table, inexpertly assembled by Wilhelm, whose powers are failing. And it is typical of the oblique narration that you might even miss the act that ends his life that same day. Mysteries abound. We first meet Wilhelm and Charlotte in Mexico, refugees from Nazism, ending their 12-yearslong exile. Has Wilhelm been a secret agent for the Soviets? The possibility dangles. Why is there just one tiny reference to Charlotte’s first husband, the father of her sons? Those sons were sent to the gulag after Kurt’s veiled criticism of Stalin in a private letter to his brother. Kurt did 10 years; his brother was murdered, circumstances undisclosed. Most important, how did Kurt keep his faith in communism after his ordeal? A case of self-deception? His son Alexander believes “everything is deception.” It’s a grand theme, but it’s left undeveloped.

Ruge takes full advantage of the varying viewpoints to display, impressively, the density of family life, but a thematic cohesion is lacking.