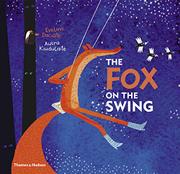 THE FOX ON THE SWING

This Lithuanian import portrays the friendship developing between a boy and a fox.

An omniscient narrator introduces Paul’s family: His father pilots a helicopter, and his mother makes pottery. More unusual is their dwelling, which is a tall tree in the park. Close observers of the zany mixed media and digital collages will glimpse a bushy orange tail early on. Paul’s first encounter with the lanky fox, clad in blue boots and enjoying a swing in the park, is during his daily walk home from the bakery. Although the fox engages in philosophical and somewhat mysterious conversations (reminiscent but not duplicative of her counterpart in Antoine de Saint-Exupéry’s The Little Prince), the boy anticipates these visits even though it means sharing his bakery treat. He learns how to be a friend in ways appropriate to her moods, especially exulting in the swinging and shouting about things that make them happy. Suddenly concerned one day, Paul asks: “Will I always find you here?” She replies: “Of course not….When I need to be somewhere else, that’s where I’ll go.” The text is longer than in many American picture books, but there is much to savor: the honesty of unspoken ruminations, challenging dialogue, and myriad unexpected details, such as a sign-carrying parade of protesting birds. The humans’ skin tones range from Paul’s paper-white to pink or red.