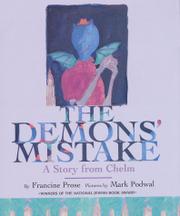 A Story from Chelm

No one has ever claimed that demons were clever. And demons from Chelm, that legendary town of fools, are as foolish as foolish can be. Of course, to illustrate this, the foolishness of the people must first be demonstrated. First one trick then another is played on the townspeople. But it seems demons are as gullible as people are. So when they hear that in America the streets are paved with gold, nothing will do but that they must depart immediately. Although they can fly, it’s awfully far, and “what will prevent us from flying off the edge of the earth?” Of all the demons, only Zereda thinks ships are too slow. She will fly to America. All of the others climb into a crate that will be shipped. What a voyage they have, trapped inside a crate that’s nailed shut! They learn one thing—demons can get seasick! And when they get to America, they learn that crates need an address or they will never be delivered. Fifty years pass before they’re finally let out! Coping with modern-day America, the demons must make some serious adjustments. Here their old tricks go unnoticed or are simple annoyances of life. Zereda has been working on this, however, and is quick to show them what to do in this modern world. Now we know who’s really responsible for all the gossip in the newspapers, the traffic tie-ups, and the glitches in computers. Podwal and Prose have worked together before: The Angel’s Mistake (1997), etc. As usual, Podwal’s quirky illustrations are perfectly suited to Prose’s subtle humor, capturing the essence rather than the specifics of details. Perfectly silly. (Picture book. 5-7)