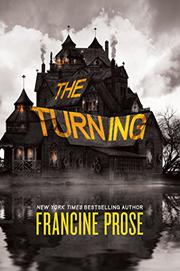 Henry James’ The Turn of the Screw is the inspiration for this epistolary novel by Francine Prose.

High school senior Jack has been hired as a professional playmate for two orphaned children who live on their wealthy family’s remote island for the summer. But the isolated place has no Internet or phone service, so Jack must write old-fashioned letters to communicate. Very quickly the strangely polite siblings and their vast spooky mansion begin freaking Jack out, and his letters to his girlfriend grow more and more paranoid. He writes about seeing the ghosts of a former teacher and the previous groundskeeper, who both died under mysterious circumstances, and he becomes obsessed with their stories. Are they real? Or is Jack losing his mind? If readers can suspend disbelief that a teenage boy would recount lengthy, word-for-word conversations in letters, then they might be susceptible to the novel’s moderately creepy tone. But the bad things are telegraphed so early and often and Jack’s voice is so nondescript, that the fear never really takes root. Whether or not the ghosts are real is left up to readers, but due to the lackluster prose and obvious foreshadowing, the question is ultimately not that frightening. Teens looking for a more elegantly executed retelling should turn to Tighter by Adele Griffin (2011).

Not enough scare there.