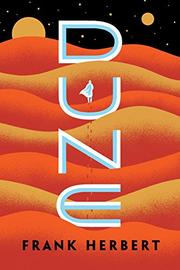 This future space fantasy might start an underground craze.

It feeds on the shades of Edgar Rice Burroughs (the Martian series), Aeschylus, Christ and J.R. Tolkien. The novel has a closed system of internal cross-references, and features a glossary, maps and appendices dealing with future religions and ecology. Dune itself is a desert planet where a certain spice liquor is mined in the sands; the spice is a supremely addictive narcotic and control of its distribution means control of the universe. This at a future time when the human race has reached a point of intellectual stagnation. What is needed is a Messiah. That's our hero, called variously Paul, then Muad'Dib (the One Who Points the Way), then Kwisatz Haderach (the space-time Messiah). Paul, who is a member of the House of Atreides (!), suddenly blooms in his middle teens with an ability to read the future and the reader too will be fascinated with the outcome of this projection.

With its bug-eyed monsters, one might think Dune was written thirty years ago; it has a fantastically complex schemata and it should interest advanced sci-fi devotees.