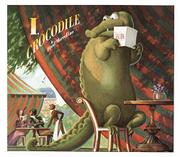 More stylish invention from Marcellino (Natalie Babbitt’s Ouch!, 1998, etc.), inspired by a 19th-century satire. While munching contentedly on a flamingo, a Nile crocodile is suddenly set upon by “bozos with funny hats and a big net,” who at the behest of Napoleon cart him off to a Parisian fountain for public display. Soon he’s the “Toast of the Tuileries,” but fashion is fickle, and when the crocodile hears that he’s slated to become a pie he makes his escape. Where? Into the sewers, of course. Crocodile tells his tale in a disingenuous tone not unlike that of A. Wolf, narrator of Jon Scieszka’s True Story of the Three Little Pigs (1989); the grand illustrations depict a rotund reptile with googly eyes, grimacing and posturing theatrically before crowds of bonneted and cockaded Parisians. He’s such an engaging sort that readers will surely forgive him for pulling down an occasional unwary passerby—a crocodile must eat, after all. (Picture book. 7-9)