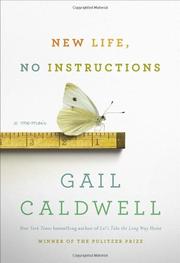 Making the most of a new lease on life.

Caldwell (Let's Take the Long Way Home: A Memoir of Friendship, 2010, etc.) has had a writing career intertwined with the writer Caroline Knapp (Drinking: A Love Story, 1997, etc.), as the two friends supported each other through challenges big and small. They’ve played roles in each other’s memoirs; this time, Knapp’s role is posthumous (she died in 2002) but no less important. Caldwell takes the death of her friend, lost to cancer, as one of three leaping-off points. She also deals with the deaths of both her mother and her dog, and while these three losses happen in a 10-year span, they comprise a loss of nearly all the closest companions she has known. “One of the things you miss after someone dies is the shared fact of you. The we of me,” she writes: “The existential anchor,” and as we know, without an anchor, there is drift. The author’s drift is our gain, though, as she ably explores the shifts of our hearts as we grieve. Her body underwent shifts as well; a case of polio from early childhood reared up again, leaving her barely ambulatory. While the heart’s ailments took longer to heal, at least in Caldwell’s case, science could assist the body. A common surgery, it turned out, could return her to full mobility; when it did, she experienced a renewed vigor in easing the emotional pain. She adopted a dog, wondering if she had waited long enough after her last dog passed away. As she explores the elastic boundaries of the heart in giving and taking new beings into our lives, she discusses her reconnection with the community around her.

Readers will enjoy Caldwell’s thoughtful, wide-eyed view of the world around her and her musings on how we get our bearings in midlife.