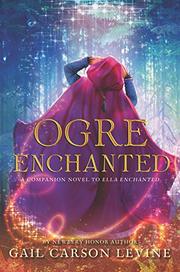 When 15-year-old healer Evie rejects her best friend’s marriage proposal in front of the fairy Lucinda, she unknowingly sets off a kingdomwide chain of events that will shape the course of Kyrrian history.

To punish Evie for rejecting an “exemplary” suitor, Lucinda transforms her into an ogre and decrees that she must accept a proposal within 62 days or remain an ogre forever. Ogres are hated and feared by Kyrrians: hairy, short-tempered, odoriferous, and magically persuasive, they eat humans and livestock with equal zeal. Hoping to learn persuasion in order to obtain a proposal, Evie joins a band of ogres and promptly falls for their human captive: a silver-tongued merchant named Peter. But will he propose? Though her time with the band is limited, her first-person narrative style meticulously notes her observations (“ogre hands are blink fast,” and “the ogre heart has a triple beat”). A chance encounter soon draws Evie back to human civilization. Even though she ministers to plague-stricken humans honorably, she faces suspicion and hostility, but she also gains loyal friends and learns valuable lessons about love. Levine references the Portuguese fairy tale “The False Prince and the True” and “Beauty and the Beast” to explore social prejudice, although Evie’s experiences as an ogre ultimately seem to reinforce how different she is more than they encourage solidarity. The book assumes a white default.

Longtime fans and new readers alike will devour this.