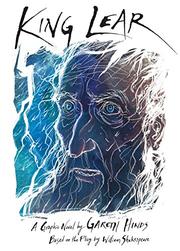 From an artist known for his vivid graphic-novel reworkings of Beowulf (2007) and The Merchant of Venice (2008) comes this nuanced adaptation of King Lear. Employing a range of artistic styles that convey dramatic mood, the artist begins the play almost as a fairy tale, featuring bright, softly washed drawings. Once Cordelia is cast out and things sour, the images become darker and more compact. As the king descends into madness, the art becomes downright menacing, with Lear appearing as a jagged, ghostly figure drawn with white pencil on a dark background. These visual cues assist to a degree in deciphering the meaning of the Shakespearean language. Much of the text of the play remains intact, though in the backmatter Hinds dissects page by page what changes were made and why, offering scholarly interpretations that are both insightful and cleanly summative. The story doesn’t leap from page, but this is a remarkably rendered and worthwhile treatment of the tragedy. (Graphic drama. 13 & up)