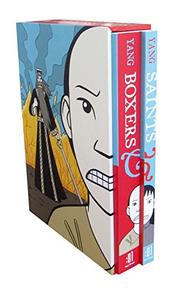 Little Bao, whose story is told in Boxers, grows up fascinated by the opera’s colorful traditional tales and filled with reverence for the local deities. Appalled by the arrogant behavior of foreign soldiers, Christian missionaries and their Chinese supporters, he eventually becomes a leader of the Society of the Righteous and Harmonious Fist, fighting under the slogan “Support the Ch’ing! Destroy the Foreigner!” The protagonist of Saints—an unlucky, unwanted, unnamed fourth daughter—is known only as Four-Girl until she’s christened Vibiana upon her conversion to Catholicism. Beaten by her family for her beliefs, she finds refuge and friendship with foreign missionaries, making herself a target for the Boxers. Scrupulously researched, the narratives make a violent conflict rarely studied in U.S. schools feel immediate, as Yang balances historical detail with humor and magical realism. Ch’in Shih-huang, the first emperor of China, and Joan of Arc serve as Bao’s and Vibiana’s respective spiritual guides; the rich hues of the protagonists’ visions, provided by colorist Lark Pien, contrast effectively with the muted earth tones of their everyday lives. The restrained script often, and wisely, lets Yang’s clear, clean art speak for itself.