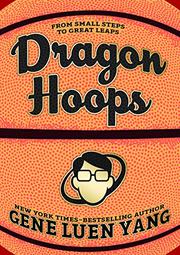 The trials of a high school basketball team trying to clinch the state title and the graphic novelist chronicling them.

The Dragons, Bishop O’Dowd High School’s basketball team, have a promising lineup of players united by the same goal. Backed by Coach Lou Richie, an alumnus himself, this could be the season the Oakland, California, private Catholic school breaks their record. While Yang (Team Avatar Tales, 2019, etc.), a math teacher and former National Ambassador for Young People's Literature, is not particularly sporty, he is intrigued by the potential of this story and decides to focus his next graphic novel on the team’s ninth bid for the state championship. Yang seamlessly blends a portrait of the Dragons with the international history of basketball while also tying in his own career arc as a graphic novelist as he tries to balance family, teaching, and comics. Some panels directly address the creative process, such as those depicting an interaction between Yang and a Punjabi student regarding the way small visual details cue ethnicity in different ways. This creative combination of memoir and reportage elicits questions of storytelling, memory, and creative liberty as well as addressing issues of equity and race. The full-color illustrations are varied in layout, effectively conveying intense emotion and heart-stopping action on the court. Yang is Chinese American, Richie is black, and there is significant diversity among the team members.