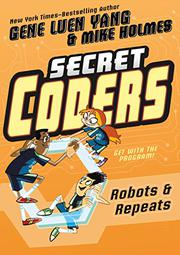 From the Secret Coders series, volume 4

The coding heroes are in a vulnerable position after Secrets & Sequences (2017).

After an entertaining Ifelse puzzle, the multicultural team of Eni (a black boy), Hopper (a biracial Asian/white girl), and Josh (a pale boy) discover the Turtle of Light, a much more powerful (and much less literal) version than the cute turtle robots from earlier books. The other-dimensional Professor Bee, now noseless, teaches them how to use the Turtle of Light to create and dismiss constructs of “virtually immovable and unbreakable” solidified light, and they’re promptly tested when attacked by Cuddles, the cat robot. After the danger has passed, Bee shows them how they can use repeats more efficiently and nest code. But this tech victory is juxtaposed with social and family conflicts: Eni’s parents want him to stay away from Hopper, Hopper’s mother wants to pull Hopper out of Stately Academy, and Josh is becoming girl-crazy. Meanwhile, the villainous, white Dr. One-Zero abruptly institutes a new chemistry class that will make more of his weaponized green pop. Yang’s integration of coding concepts into an actual mystery plot even as he continues to deepen character development in under 100 graphic pages looks effortless; Holmes’ panels continue to visualize those concepts inventively.