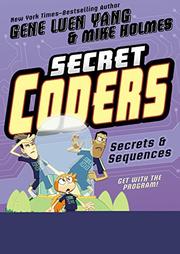 From the Secret Coders series, volume 3

The series’ overarching plot ramps up in the third entry of the Secret Coders series.

With Professor Bee still stuck at the mercy of the villainous Principal Dean and his rugby goons in the cliffhanger that ended Paths and Portals (2016), friends Hopper (mixed race, Chinese/white), Eni (black), and Josh (light-skinned but racially ambiguous) must first program their way out of danger. After that situation is resolved, Hopper receives a warning that the principal is quite evil and that Hopper’s mom might be in danger—but their mother-daughter communication still falters. Bee gives more coding lessons and also teaches the kids about his first students, among whom were Hopper’s missing father and Pascal, a brilliant pupil who ended up building an army of robots for world domination. Although Bee, Hopper’s father, and their team stopped him, Bee now worries that Pascal is back. Soon enough, Dean has Hopper’s mom at gunpoint to force the coders to find a flying turtle that takes them right into the lair of a villain far worse than Dean. The coding principles focused on—parameters and Ifelse (if else) statements—are well-explained and -illustrated, which is necessary for readers to follow along with the characters’ actions. The cliffhanger puzzle is an especially snazzy way to end this outing.

Nearly every element (especially the bad guys) escalates wildly and successfully in this nifty comp-sci romp.