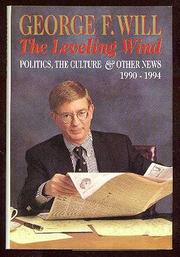 by George F. Will

Another 175 pieces of Will's lively, inquiring mind. In his fifth collection (Restoration, 1992, etc.) of short- take commentaries (drawn largely from work published in Newsweek and the Washington Post over the past four years), the syndicated columnist addresses a wealth of consequential issues. To a great extent, however, Will's varied pieces are linked by his concern about the chill, leveling winds of cultural change now whistling through contemporary American society. Informed by a classically conservative sensibility, the author inveighs against the epidemic of illegitimate births, promotion of group (rather than individual) rights, the desensitizing effects of represented violence, the politicization of education, the coarsening of popular entertainment, and the socioeconomic costs of urban decay. Other targets of opportunity include George Bush (who, Will feels, Desert Storm notwithstanding, effectively squandered Ronald Reagan's legacy), Bill Clinton (whose on-again/off-again liberalism earns him comparison with Henry of Navarre, one of history's slicker chameleons), quota systems (whether ethnic, racial, or sexual), interventionist government, Patrick Buchanan, political agendas tarted up to pass as civil rights, the proliferation of victim status, and academe's tenured radicals. If Will finds considerable fault with the latter-day US, he does not ignore the plus side of the ledger altogether (noting at one point that journalists seldom report on all the planes that land safely). By way of example, he celebrates many of the dedicated individuals who work with underclass kids on the mean streets of inner cities that have long since lost their alabaster gleam. The Pulitzer Prizewinning author also has kind words for meritocracy (wherever observed), free trade, traditional family values, Andrew Jackson, Thomas Jefferson (whom he designates the man of the millennium), Harry Truman, and other icons whose libertarian appeal may not be readily apparent to casual students of ideology. Articulately partisan critiques of the volatile and evolving state of the union.