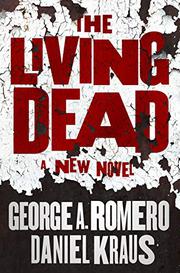 by George A. Romero & Daniel Kraus

The last testament of the legendary filmmaker is a sprawling novel about the zombie apocalypse that dwarfs even his classic movie cycle.

Though this long-simmering novel was unfinished when Romero died in 2017, his estate turned its completion over to Kraus, an adept novelist and collaborator with Guillermo Del Toro. The result is a satisfying, terrifying chronicle of the zombie crisis that includes explosive set pieces and moving character beats in equal measure. Just before Halloween, the first cadaver appears in the lab of San Diego medical examiners Luis Acocella and Charlie Rutkowski, asking the pair “Shall we dance?” even as Charlie holds his heart in her hands. In rural Missouri, teenager Greer Morgan soon learns society’s rules have been drastically altered by the rise of the dead. The growing severity of the crisis is seen at a national television studio in Atlanta, where conceited anchor Chuck Corso finds the danger growing closer and closer. On the aircraft carrier USS Olympia, helmsman Karl Nishimura and pilot Jenny Pagán join forces when they’re trapped between the resurrected dead and the zealous chaplain convinced God wants him to lead a death cult. These harrowing survival stories are marked by cinematic spectacles—a bloody escape by jet fighter, a school shooting, and fragments told from the zombies’ point of view are among the memorable episodes—but Kraus injects a dramatic dose of human pathos into the mix as characters bond, fight for survival, and frequently die so that others may live. By the time these disparate characters converge in the last act after a significant time jump, readers will know them so well that each loss takes on more emotional weight. Less soapy than The Walking Dead and less inventive than Max Brooks’ World War Z, it’s still a spectacular horror epic laden with Romero’s signature shocks and censures of societal ills.

A blockbuster portrayal of the zombie apocalypse and a fitting tribute to the genre’s imaginative progenitor.