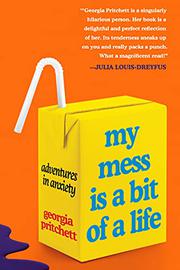 MY MESS IS A BIT OF A LIFE

A respected film and TV writer looks back on her life and struggles with anxiety.

Writing, notes Pritchett, is “just something that I like to do” rather than something she expected would garner accolades. But after she was awarded an “unnecessarily big [Hollywood] trophy,” she suddenly felt as though she “was being slowly digested by a giant black snake.” The jumbled, depressed author then went to a therapist only to find she literally could not talk about anything. So she began to write her story instead. The result is a droll memoir that explores the fears that began when, at age 3, Pritchett had the terrifying realization that “bad things happen” and “we’re all doomed.” The author portrays herself as a neurotic child worried about everything from dying in the night to monsters hiding under her bed: “Were they comfy enough? How could they sleep on a hard floor surrounded by crumbs and dust? Sometimes I slept under the bed so that they could have a turn on top.” Pritchett credits her grandfather, acclaimed novelist and literary critic V.S. Pritchett, with teaching her that writing could be a “lifeline” to escape the hard-edged randomness of life. The author got her first break writing comedy for the British media outlet Radio 4 only to have her material credited to “George.” Yet even as she experienced success, she was still “treated like an imposter”—not only for her lack of a degree from a prestigious university, but also because comedy itself was dominated by men who treated her with hostility and a sense of sexual entitlement. Though some readers may not fully appreciate Pritchett’s spare style and the nicknames she uses when referring to those who are closest to her, anyone who enjoys Pritchett’s work and/or British humor will no doubt like this book.

Mordantly understated at times, delightfully sharp-tongued at others.