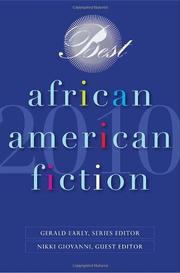 Running the gamut from accessible crime fiction to experimental efforts by critics’ darlings, this ambitious anthology offers a snapshot of modern black culture without being tied to a single theme.

Guest editor Giovanni mixes predictable big names with relative unknowns in the second installment of a new annual series. Edwidge Danticat’s “Ghosts,” set in a Haitian slum, features an aspiring young journalist who learns the hard way just how relative notions of good and evil are in his world. Less exotic but just as sharply observed is Colson Whitehead’s “The Gangsters,” which depicts middle-class youths coming of age in the Hamptons during the summer of 1985. An excerpt from Jewell Parker Rhodes’ novel Yellow Moon takes on voodoo, murder and vampires in modern New Orleans, while Glenville Lovell’s “Out of Body” is told from the point of view of an urban crime lord. Slavery and its bitter legacy are the subjects of several pieces, most arrestingly the opening story, “The Ariran’s Last Life,” in which a young African captive awakens to her mystical power. Kim Sykes provides a welcome shot of levity with “Arrivaderci, Aldo,” narrated by a bored female security guard working at a TV/movie studio. The surprising final selection, “Mary Jane,” shows a young black girl, one of the first to integrate a Southern high school, persevering over shocking prejudice. Serving as a reminder of how far American society has come—in some regards—the piece surprises partly because it’s excerpted from a 1959 young adult novel and partly because the late Dorothy Sterling, who wrote extensively about African-American subjects, happened to be white.

A rich compilation, opening up territory for further exploration.