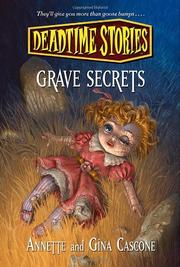 From the Deadtime Stories series, volume 1

The Deadtime Stories from the mid-1990s are rising again—this time in conjunction with a planned series of live-action TV-movies.

In this lightly edited reboot, preteen Amanda discovers an old doll buried in her backyard and shortly thereafter begins receiving ghostly messages written in sand or bathroom steam along the lines of “I want my baby back—now!” Then the doll disappears. Getting it back entails multiple encounters with Anna, the child ghost from whom it was stolen long ago, and the hostile, spooky old lady next door known to Amanda and friends as “Barnsey.” The shudders here are laboriously manufactured by contrived cliffhangers at each short chapter’s end, an obnoxious character who revels in sharing eerie rumors about Barnsey’s supposed witchy ways, nighttime expeditions into her yard and, particularly, with frequent screams: “And Kevin, who had been screaming his head off over Anna’s appearance, stopped screaming mid-scream the moment he saw Barnsey.” There’s no overt gore or violence, Anna fades away once she’s reunited with her doll and Barnsey, unsurprisingly, suddenly turns into a nice old lady.