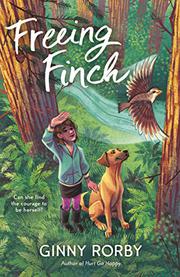 In her author’s note, Rorby explains that the book was originally inspired by an extremely sad dog, but then she met an elderly transgender woman whose experience became the basis for “the heart of this story.” She goes on to say she then spoke with some trans children and their families, and Finch Delgado is the unfortunate result. She is an 11-year-old transgender girl who deals with both predictable trans trauma (sexual assault, threats of conversion therapy) as well as the death of her beloved and understanding mother, a ne’er-do-well father, an unemployed, alcoholic stepfather, and his religiously conservative new wife. Finch’s solace comes from Maddy, an elderly neighbor who rehabilitates animals, and her new friend Sherri, a cool girl from Vegas with a deadbeat mom. Even if the story didn’t whiplash between cookie-cutter angst and the overwrought metaphor of a wary but loyal neglected dog, the story would still be rife with flaws. Finch reads like a much older character, and uneven character development, didactic writing, and excruciatingly slow pacing further derail the reading experience. Finch ultimately comes across as a collection of stereotypes rather than a fully realized character, and the cis characters are all either remorseless bullies or flawless supporters (and sometimes, confusingly, both). Finch’s Latinx-sounding surname notwithstanding, characters are default white.