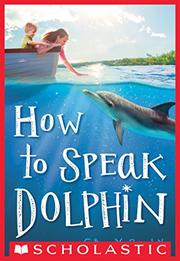 HOW TO SPEAK DOLPHIN

Is dolphin-assisted therapy so beneficial to patients that it’s worth keeping a wild dolphin captive?

Twelve-year-old Lily has lived with her emotionally distant oncologist stepfather and a succession of nannies since her mother died in a car accident two years ago. Nannies leave because of the difficulty of caring for Adam, Lily’s severely autistic 4-year-old half brother. The newest, Suzanne, seems promising, but Lily is tired of feeling like a planet orbiting the sun Adam. When she meets blind Zoe, who will attend the same private middle school as Lily in the fall, Lily’s happy to have a friend. However, Zoe’s take on the plight of the captive dolphin, Nori, used in Adam’s therapy opens Lily’s eyes. She knows she must use her influence over her stepfather, who is consulting on Nori’s treatment for cancer (caused by an oil spill), to free the animal. Lily’s got several fine lines to walk, as she works to hold onto her new friend, convince her stepfather of the rightness of releasing Nori, and do what’s best for Adam. In her newest exploration of animal-human relationships, Rorby’s lonely, mature heroine faces tough but realistic situations. Siblings of children on the spectrum will identify with Lily. If the tale flirts with sentimentality and some of the characters are strident in their views, the whole never feels maudlin or didactic.

Dolphin lovers will appreciate this look at our complicated relationship with these marine mammals.