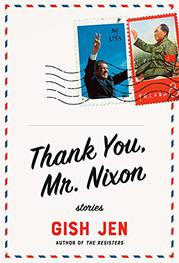 This stunning new linked short story collection offers a fresh take on the experience of immigration and exile.

Political and economic relations between China and the United States are major news, but Jen takes it to the micro level in her vibrant short stories about characters who are varying degrees of Chinese and American—and for whom the question of what it means to be Chinese and/or American touches every corner of their lives. In the title story, a Chinese woman who was a young girl when she met U.S. President Richard Nixon during his historic visit to “open” China expresses her gratitude to him for the changes in her country. She’s writing him from heaven; his address is the ninth circle of hell. In "It’s the Great Wall!" American-born Grace Chen de Castro goes with her immigrant mother, Opal, on a tour of China—Opal’s first return home in 40 years. Despite the clowning of Grace’s annoying non-Chinese husband, the daughter’s understanding of the mother will be transformed as Opal bridges both cultures. Several of the stories revolve around the Koo family. Tina and Johnson Koo live in a posh home in Hong Kong, with a view of the city from a “picture window, in the blue light, with the mountain and mist like a screensaver behind them.” There, Tina frets over her daughters, Betty, “the good one,” glamorous youngest Lulu, and especially the oldest, Bobby, who has not only moved to America with no apparent intention to return, but has cut off contact with her parents. Some of the stories about the Koos, like "Lulu in Exile," about how Lulu’s promising relationship with a rich, older Chinese American man is scuttled by the man’s shrewd mother, are hilarious. Others, like the final story in the collection, "Detective Dog," are heartbreaking. Recurring and related characters link all of the stories, which are set across several decades. Jen’s crisp prose, wonderful eye for detail, and wry humor make them a joy to read, and there is wisdom here, too—we’re all exiles from something.

Living between cultures might mean never being at home—or finding home in the space between.