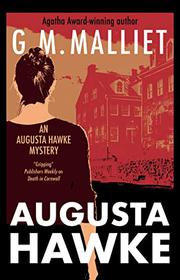 A seasoned mystery writer investigates a real-life disappearance in her Northern Virginia neighborhood.

Even in an upscale neighborhood like Old Town, Zora and Niko Norman stood out, he as a highly successful family attorney specializing in parental abductions, she as an impossibly beautiful new mother. One day they’re both gone without a trace, leaving behind only their splashy house and their baby son, Harry, who’s safely in the custody of Zora’s mother, gallery owner Genevieve Garnier. Since Detective Steve Narduzzi seems to be getting nowhere, the Normans’ neighbor Augusta Hawke decides to ask questions of a few people. And not just any people. In short order, she’s learned that the Garniers, moved by suspicions and antipathy, hired private eye Kent Haworth to look into Niko’s background even before the marriage; she’s disguised herself as a potential divorcée to interview Niko’s colleague Mindy Goodacre; and she’s gone looking for Trixie Steppes, the babysitter the Normans shared with another family, who seems to have vanished herself. It’s an excruciatingly familiar gambit, but veteran Malliet handles it with aplomb until the very end, dispensing with most of the suspects in a few sentences each, as if they didn’t bear much attention, to ground Augusta’s investigations in realistic-seeming rhythms, inducements, problems, and reasonable but unheeded warnings from Detective Narduzzi—until the climactic episode suddenly turns her into a damsel in distress whose behavior, as she acknowledges, is “like something out of a bad mystery novel.”

A flawed but mostly superior example of the nosy-neighbor-investigates subgenre.