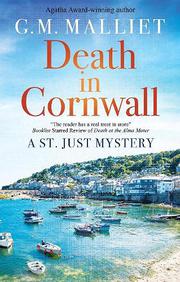 Taking time away from his duties as a Cambridgeshire DCI, Arthur St. Just travels with his all-but-fiancee Portia De’Ath to the picturesque village of Maidsfell for a quiet vacation. Guess what happens next.

Sad to say, Maidsfell has been ripe for murder for a long time. Celebrity chef Jake Trotter and Michelin star–winner Morwenna Wells are fierce rivals. Fisherman Will Ivey and estate agent Cynthia Beck, agitators who support the Save Our Shore initiative, are bitterly opposed by townsfolk convinced that new development is their only salvation from the plague of Covid-19. The Rev. Judith Abernathy, the curate presiding over St. Cuthbert’s while vicar Peder Wolfe dries out in rehab, is recently widowed, and Morwenna and Wiccan practitioner Sybil Gosling are both mourning daughters, Sybil’s killed by a drunk driver, Morwenna’s by a leap from the Fourteen Maidens, the cliffside standing stones that had been the village’s sole claim to fame. Suddenly, however, the murder of Lord Titus Bodwally, the life peer of Revellick House who’s a not-so-silent partner in Jake’s restaurant, beckons unwelcome new media attention. DCI Tomas Mousse, of the Devon and Cornwall Constabulary, urges St. Just, who hasn’t had a published case since Death at the Alma Mater(2010), to step in. Partnered by Portia, a Cambridge don in criminology with a sideline writing detective novels, St. Just begins questioning the suspects just as the murderer strikes again. The news that Bodwally ate a poisonous fish before he was stabbed to death scuttles any hopes that Portia’s latest title, No Crime Like the Present, will be prophetic.

Low-key, highly professional work right up to the unmasking of the surprisingly well-hidden killer.