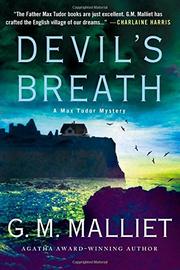 A former MI5 agent who’s taken Holy Orders is recruited to investigate a murder on the high seas that’s brought Hollywood to the English coast.

Former starlet Margot Browne is less interested in aging gracefully than in appearing forever young to her adoring fans in her latest project, a film by famed director Romero Farnier, her former flame. At least, that’s her perception of things, and Romero doesn’t have the heart to tell her she’s too old and washed up to be a star. Romero invites Margot as a guest on his yacht on a literal guilt trip, a trip in which she’s literally washed up after getting killed and pushed overboard by one of his other guests. All this happens on the waters near Monkslip County, home of former MI5 agent–turned–Rev. Max Tudor, who is asked by his former colleague to investigate while she takes care of some personal matters. Though the murder is a closed-circle crime with a limited number of suspects, each of the potential killers seems too self-centered to have deigned to interact closely enough with Margot to kill her, from her boyfriend-in-name-only to some distant royals who turn up their noses at commoners. Max uses all his resources (which are mainly limited to his personal charm) to learn the secrets of the rich and famous only to find that even though everyone has something to hide, they all agree it’s better to be notorious than unknown.

Though dedicated readers may miss local favorites (The Haunted Season, 2015, etc.), it’s great to see the return of Malliet’s wit in a high-seas whodunit that deftly skewers the Hollywood high life.