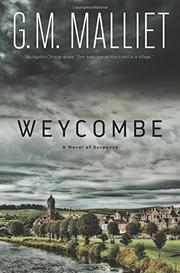 The rich are indeed different from you and me: they’re better at hiding their secrets.

Residents of the wealthy English village of Weycombe are too classy and buttoned-up to express overt disagreement about anything more fraught than the mission statement of the local book club. But resident Jillian White is American, and even though she's married into an aristocratic family, she hasn’t fully adjusted to the lack of outward conflict. Perhaps that’s why she’s so entranced when her neighbor Anna Monroe is murdered. Jill finds herself drawn to investigate Anna’s life and uncover her extramarital dalliances, which may be the least shocking of the secrets she was hiding. Reaching out to Anna’s closest friends, Jill learns that the other women in town may have known more about Anna than anyone realized. Although Jill conscientiously questions Anna’s social-climbing boyfriend, her chronically ill husband, and various trophy wives and DIY queens, she can claim all too little personal companionship of the sort that might have given her the more complex voice necessary to motivate the plot twists. As Jill unmasks substantive facts that could explain Anna’s death, she approaches the insight that her interest in the subject is helping her avoid a more thorough examination of her own life and relationships.

The self-referential witticisms give the tale a very slow start; the windup reads like Gone Girl on a Train. One thing’s for sure: Malliet has departed sharply in setting and style from the bucolic world of the Max Tudor novels (Devil’s Breath, 2017, etc.).